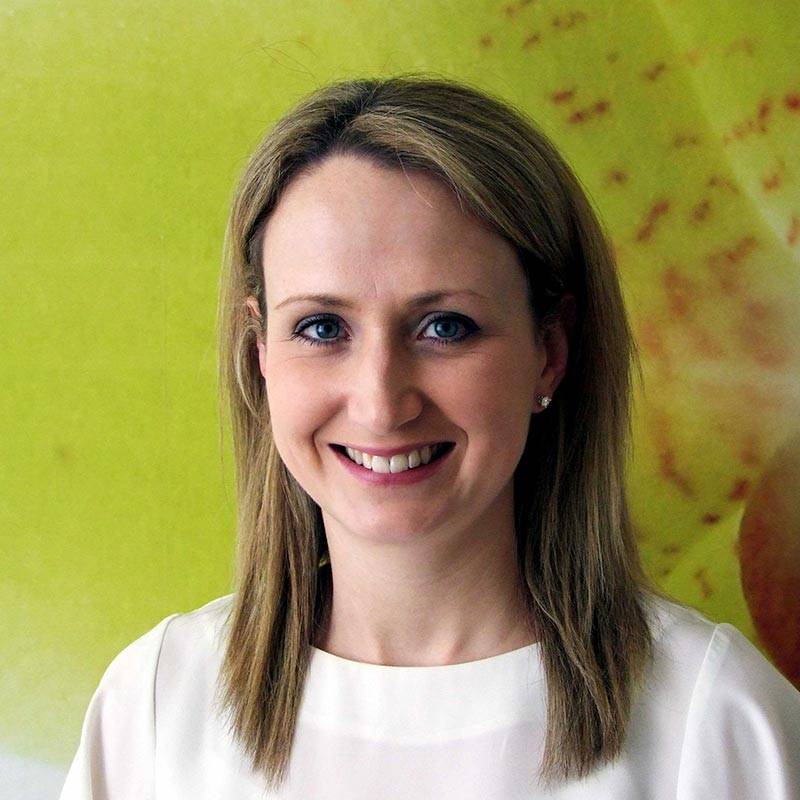 Dr Aoife Ryan graduated from Trinity College Dublin/Dublin Institute of Technology with a BSc Human Nutrition and Dietetics in 2000 and was the recipient of a Trinity College gold medal. She initially worked as an oncology dietitian at St. James’s Hospital for 7 years during which time she completed her PhD (2007) at the Department of Surgery, Trinity College Dublin. She was Assistant Professor of Nutrition at New York University from 2008-2010. In 2011 she joined the academic staff at the School Of Food & Nutritional Sciences where she is now a senior lecturer. Aoife is also a CORU Registered Dietitian.

Aoife’s main area of research is the effect of cancer on nutritional status. Her current research programme focuses on: (1) Computed tomography (CT) diagnosed cancer cachexia and sarcopenia and the impact on quality of life, toxicity to chemotherapy treatment and survival (2) the development of functional foods to treat anorexia of aging and disease (3) role of nutrition in the prevention and treatment of cancer.  She has been awarded INDI Research Dietitian of the Year and the Julie Wallace Award from the Nutrition Society.  Aoife has published many scientific journal articles and four cookbooks for cancer patients which have all been professionally endorsed and have received a number of awards.

Summary: The prevalence of malnutrition in patients with cancer has frequently been shown to be one of the highest of all hospital patient groups. Weight loss is a frequent manifestation of malnutrition and several large scale studies over the last 40 years have reported that involuntary weight loss affects 50-80% of patients with cancer with the degree of weight loss dependent on tumour site, type and stage of disease.

The prognostic impact of weight loss on overall survival has long been recognised with recent data suggesting a weight loss as little as 2.4% predicts survival independent of disease, site, stage or performance score. In addition to the adverse impact on survival, weight loss has historically been associated with severe chemotherapy-related toxicity; is a predictor of postoperative complications and higher health care costs and leads to a significant deterioration in a patients’ performance status, psychological well-being and overall quality of life.

The scientific literature describing the prevalence and impact of cancer-related weight loss will be reviewed in this presentation with particular emphasis on the Irish context.

Back to Speakers
Donate to IACR

Our virtual conference from 24-26 March and was a huge success. It highlighted the spectrum of cancer science, medicine and research across the island of Ireland.